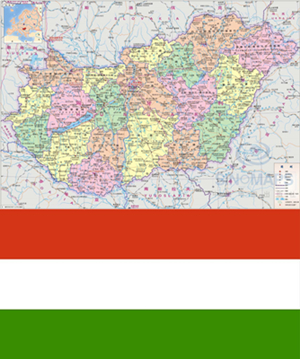 The guest of honour — Hungary

Hungary (Magyarország) is located in Central Europe, spanning about 93,000 square kilometers. It has a total population of about 9.79 million. The capital is Budapest, and the official language is Hungarian. Hungary borders Romania and Ukraine to the east, Slovenia, Croatia and Serbia to the south, Austria to the west, and Slovakia to the north. Enjoying favorable geographical advantage, it is one of the important distribution centers for Chinese commodities in Europe. In 2017, Hungary’s GDP was USD 129.3 billion, and its per capita GDP was USD 13,196 thousand. In recent years, China and Hungary have maintained good economic and trade relationship, and the import and export of commodities have shown a growth trend. In 2017, the total volume of imports and exports between China and Hungary reached USD 10.1267 billion, with a year-on-year growth rate of 13.9%. To be specific, the exports reached USD 6.0496 billion at a growth rate of 11.5%; the imports recorded USD 4.0771 billion, up 17.7% year on year. The total import and export volume of Henan Province to Hungary has been above USD 23 million. In 2017, Henan’s total import and export volume to Hungary was USD 25.49 million with the exports of USD 20.22 million and the imports of USD 5.27 million. In 2018, the total volume of imports and exports between Henan and Hungary reached USD 23.38 million, with the exports of USD 17.53 million and imports of USD 5.86 million. The main commodities exported to Hungary from Henan are textiles, garments, tempered glass, etc. And the main products imported by Henan from this country are electrical installations, electrical equipment, and vehicle transmissions.

Approved by the state, China (Henan) International Investment & Trade Fair is the largest, most influential, top-notch, international and national event in Henan Province. It also serves as an important platform for Henan Province to expand opening-up and undertake industrial transfer. 12 consecutive sessions have been held. This session of China (Henan) International Investment & Trade Fair has chosen Hungary as the guest of honor. The Fair will be harnessed as a platform to integrate Henan deeply into the “Belt and Road Initiative” and expand trade and economic cooperation with countries along the routes, especially Hungary, so as to enhance the influence of Henan and build a new pattern of all-around opening-up.

Hungary has a good relationship with China and Henan, indicating a great potential for cooperation. 2019 is the 70th anniversary of the establishment of diplomatic relationship between China and Hungary. And Hungary is the guest of honor of this China (Henan) International Investment & Trade Fair. István Joó, the Deputy State Secretary for Export Development in the Ministry of Foreign Affairs and Trade will lead the government delegation, and the Hungarian Export Promotion Agency will organize the enterprise delegation to participate in this event in Henan. During the period, it is scheduled to set up the Hungarian Pavilion especially for the exhibition, and the opening ceremony of the Hungarian Pavilion, China (Henan)-Hungary Economic and Trade Cooperation Forum, Matchmaking for Economic and Trade Cooperation, the field visits in Henan and other activities will be held. These activities with Hungary, the guest of honor, will further intensify the economic and trade exchanges between Henan and Hungary and promote comprehensive cooperation in economy, trade, culture, education and tourism.